A Lesson For Humanity 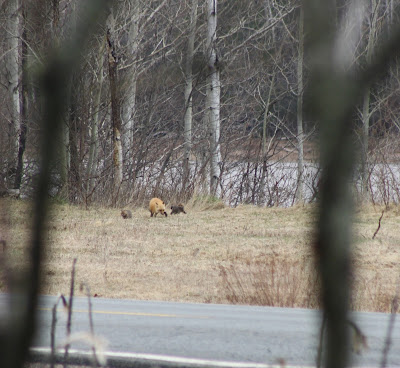 Early this morning when I started on my morning walk, I paused at the end of our driveway.
I'd just glanced down the road and knew what I was seeing.
The final fox kit lying dead on the road.
The photo above is of the fox family in early spring, 2019; I don't have any current photos. Every year the foxes den up in the bank on our lot along the river and usually produce two to three kits. At least one of them gets struck by a car every summer. I really wish the foxes would move the kits out of that den and into the woods on our side of the road when the kits are still small enough to lug by mouth, but I guess living right along the river has its appeal to animals as well as humans.
But it's what I dread: Seeing the body of a young fox lying on the road.
There were three kits in the spring but soon, we only saw two; perhaps one was sickly. Two weeks ago, a fox kit was lying dead on the side of the road, its sibling sitting in the grassy verge several meters away. There is a vacant lot next to ours that is well-treed and that is often where they are.
My pastoral care was absent because I had been shooing them away from the side of the road for a couple of mornings. "See? This is why I tell you to stay off the road."
And as I passed the dead fox kit on the road, I said, "I'm sorry. I'm so sorry."
The mother is always busy, hunting and bringing home the food. She seems to understand the road, how to avoid getting killed by the vehicles that speed up and down at all hours, day and night. Why is this knowledge not passed on to her kits?
I started walking down the road, thinking I would just go on my walk, but I couldn't, couldn't leave it the body there. As I turned to return home, the mother came to the shoulder and barked.
"I'm sorry," I said to her. She barked again.
"I didn't do it," I told her. She dashed back into the woods.
So, no riverbank fox kits survived this year.
I got the wide snow shovel and headed back to move my little friend off the road. It hadn't been dead long, its body floppy and soft, and lean. A young, healthy kit. It was just coming into its red fur, its legs still the grey colour of a kit. Foxes are such pretty animals.
The only sign of trauma was blood on one ear.
The lot next to ours also has several overgrown driveways. I walked to the first one and laid the fox's body on the ground underneath the low, spreading branches of a pine tree. There were no wildflowers nearby for me to pick and place on it.
I took the shovel home and began my walk again.
But here's what also happened:
As I came alongside the fox body lying in the middle of the road, I heard a car coming down the road. It's a large black vehicle I see at the same time every morning. I stood on the opposite shoulder, with my bright blue shovel, and waited for the vehicle.
The driver would have seen me standing there, surely would have seen why -- the fox body across from me on the road. Would you not be curious?
But the driver did not slow down at all.
Walking this road every morning, I know the sounds of speed, of slacking off, of slowing down. This vehicle did not slow down as it passed me standing there near the body of a dead young fox.
And as I took my morning walk, I realized that's humanity and the natural world, humanity and climate change:
We are speeding down the road, we see the destruction, the death in our path, we see what is up head, we see the warning signs, we see the people trying to help, trying to save, trying to clean up the mess,
but we don't slow down. We don't brake, we don't swerve, we don't stop.
We don't change our speed at all.
We just keep driving as if there is no one standing at the side of the road waiting to deal with the destruction caused by our careless existence.
~ SJ