The World Is Changing 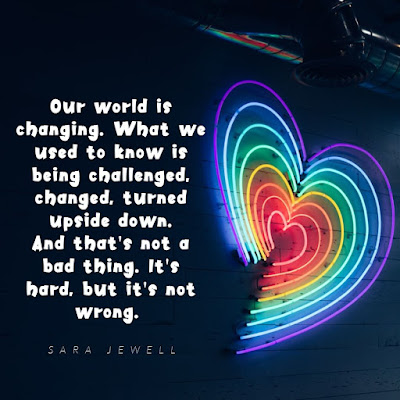 When I'm teaching, my alarm is set so I can listen to the five o'clock news (it's set for the radio to go off). I get up that early so I can do my yoga practice before facing a day of substitute teaching! But lately, I haven't been able to do yoga because of an issue with lower back, so on Friday morning, I set my alarm for five thirty.
Since I set my clock time ten minutes ahead, the radio came on with ten minutes left in an interview program, and since I'd been awake since five (!), I lay there and listened to the end of an interview with who turned out to be the first transgender woman to be elected to the Virginia legislature. She ran and won as a Democrat in 2017.
In the final few minutes of the interview, the interviewer wanted her to comment on the apparent division or in-fighting within the Democratic Party. She dodged the question so he came back with a quote from a man who was part of the Clinton administration, a man lamenting that many Democrats feel they can't voice their views for fear of being cancelled.
And what I immediately thought was, and have been thinking ever since,
"He means he, and others, are not comfortable with people who are transgender. The world they know and felt comfortable in, excelled in, dominated, even controlled, is changing quickly."
The Clinton era was the 90s. The world was just coming around to accepting gays and lesbians. Getting used to them. Getting acquainted with them. Tolerating their existence, like it or not.
But of course, gay men in particular were still getting the shit kicked out of them.
And of course, religious types were still spouting Bible verses to deny their existence.
Now, those who lived even deeper in the shadows, even deeper in fear of being discovered and outed,
now they are coming out and saying, "I deserve to be my authentic self. I deserve to be who I am and to be loved as I am. "
And that I am is a transgender male or female. Or simply a queer person who doesn't want to identify as any particular gender.
This is very challenging, even upsetting, for people of a certain age, a certain era - say, the Clinton era, the Bush era - because it upends EVERYTHING. It challenges the status quo of EVERYTHING. It demands we see and hear and speak in totally different ways.
It takes inclusive language and inclusion in general to a whole new level -- not levelling up once, but at least three levels.
People are defaulting back to fear and ignorance, which means violence and vitriol are on the rise.
But we are called to respond with love. With compassion. With, at the very least, indifference -- as in, it doesn't matter. As in, this doesn't impact my life so why am I shaming/denigrating/rejecting someone who simply wants to be true to who they are? What does it matter to me?
I mean, it does matter. But indifference is a better reaction than denial, rejection, and hatred.
Indifference leaves the door open a crack so that when someone you know and love suddenly says, "Actually, I'm trans," your reaction may not be as hurtful and hateful and fearful as it could have been.
So when I hear someone of a certain age, and a certain era say that "people can't express their views without feeling like they're going to be cancelled", I hear "My views aren't keeping up with the reality of our evolving world, and they are hurtful and regressive, but they are what I'm comfortable with and I don't want to change them."
Yep, our world is changing. What we used to know is being challenged, changed, turned upside down.
And that's not a bad thing. It's hard, but it's not wrong.
I will take inclusion -- welcome and acceptance of everyone -- over nastiness, meanness, bullying, trolling, and exclusion every single day.
It's the upside-down gospel of Jesus.
Love each other.
Take care of each other.
Take care of the poor, the weak, the sad,
the oppressed, the depressed, the anxious,
the old, the young, the vulnerable.
The ones getting beat up,
getting attacked with words and with objects,
the ones living in fear.
Above all,
love one another.
Where love is: kindness, mercy, fairness, tolerance, compassion, inclusion, justice, acceptance.
~ SJ