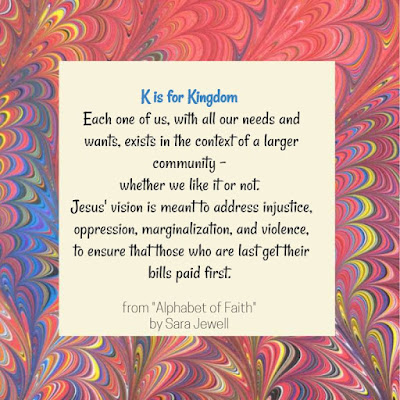 In the 21st century, I think most of us associated the word "kingdom" with the Bible, specifically with Jesus' talk about the "kingdom of God". We don't do kingdoms anymore; I don't think they were associated with good things back in Jesus' time. These days, we talk about regimes in the same way; they are authoritarian and not good for the average citizen.
Changing "kingdom" to "kin-dom" is a big improvement but it still ties us to that ancient form of oppression, invasive rule.
I struggle with the use of the term "kingdom of God" which is why halfway through this essay, I pivot to the term "community". We are all part of the human community, the human family.
Of course, we're thinking of this all the time now, as we watch the assault on Ukraine. It's beyond heartbreaking now; it's terrifying. Someone on the television said, "We're already seeing World War Three."
And the talk of Russia bringing in soldiers from Syria just reminds us of that civil war that we couldn't interfere with, that ruined a beautiful country, and sent so many fleeing to other countries where they have not been welcomes quite as quickly and unreservedly as the Ukrainian refugees have been.
We are all part of the global community -- whether we like it or not -- and we are called to speak out against injustice, oppression, marginalization and violence. But right now, it feels like shouting into a blizzard.
With that in mind, I'm going to make a donation to Doctors Without Borders this afternoon. To put my money where my mouth is, as my way of speaking out.