Love Your Enemy With Cake 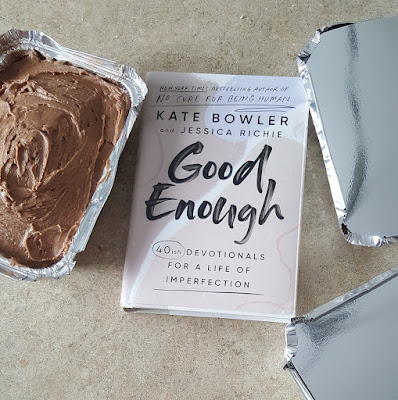 The season of Lent began this week with Ash Wednesday. For this season, I’m reading Kate Bowler’s new book, Good Enough: 40ish Devotionals For a Life of Imperfection.
As I read devotion number 2, called “Buoyed By the Absurd”, I read the following passage about doing something that seems absurd:
“When you are sinking under the weight of grief or falling prey to the fears that stalk your mind, try on joy for a change. Turn on the music and dance in your kitchen…Bake a cake and have a party celebrating that it’s Tuesday. Drop a surprise note and treat on a friend’s doorstep.”
And since I’ve been laid up all week with a bulging disc in my back, I decided I’d bake a cake. That was a standing activity which wouldn't aggravate the already-aggravated disc.
Then I decided I would bake two cakes, or rather, one regular cake for my house and three smaller cakes to give away. Treats on the doorstep. For no other reason than it is snowing again.
As I stood in the kitchen, finding the recipe and gathering my bowls, I thought of three people who would receive an absurd cake treat.
The third name that came to me is my enemy.
I haven’t been thinking of this person. I want nothing to do with this person. I do what I can to keep this person out of my life. There is no trust in and no love for this person.
But there they were: the third name. Sliding into my brain like they were buttered as slick as my pan.
And because it came from my gut (or my heart, I’m never sure which), I knew it was true and right, and that I had to honour it. That I would honour it.
And I was okay with that.
That’s the weirdest part of this. There was no objection on my part, no resistance or refusal. I was perfectly okay with giving my enemy an absurd piece cake. Which must be the joy of imperfection.
Because we are called to love each other
but also
to love our enemies.
There is nothing more absurd than that notion.
Yet it’s what we are called to do.
(Which is why, when a Russian soldier is captured in Ukraine, they give him tea and let him call his parents. Wouldn’t it be great if that became the reason they all let themselves be captured?)
It’s absurd. It’s an act of compassion, for myself and for this other person. And it doesn’t cost me anything to share a cake with someone I don’t like. Especially when that voice inside me tells me to.
The chapter ends with … “Some things cannot be cancelled out. But you are capable of a whole range of emotions that can coexist. Joy and sorrow. Grief and delight. Laughter and despair. Sometimes, the absurdity even keeps us afloat.”
The absurdity of the situation makes it beautiful. A moment of joy.
~ SJ