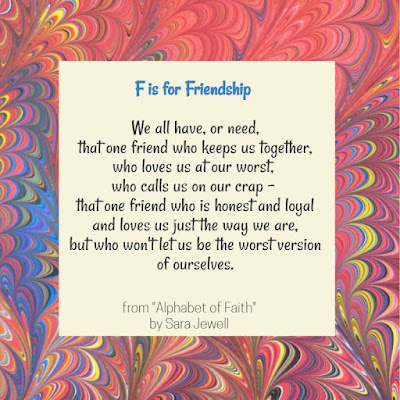 Readers need to remember that the essays in Alphabet of Faith were originally sermons
delivered during a church service.
It was great to have the opportunity to edit them and expand them for a broader audience,
but this also means they each have their own personality -- and quirks.
My essay about friendship is one of the quirky ones!
It's the oddest, but I think one of the most interesting, essays in the collection. How many people would try to compare the ambitions of Freddie Mercury, lead singer of the rock band, Queen, to the ambitions of Jesus?
At the same time, the essay tells a very personal story of mine and how I, like Freddie and Jesus, needed that one good friend to save me from myself. Of course, neither Freddie nor I were trying to defy the religious authorities, and take down a regime, and create a new kind of kingdom on earth --
based on kindness, mercy, justice for everyone, but particularly
the poor, the hungry, the grieving, the persecuted --
so...
"F is for Friendship
We all have, or need, that one friend who keeps us together,
who loves us at our worst and calls us on our crap --
that one friend who is honest and loyal
and loves us just the way we are,
but who won't let us be the worst version of ourselves."
~ from Alphabet of Faith by Sara Jewell