Prayer As An Act of Love 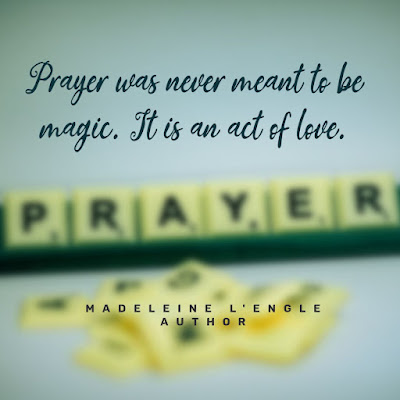 I wrote and published a poem on my Facebook author page on Friday that was titled,
"How To Pray In A Time of War".
The graphic that went with it quoted the final lines of the poem:
"The bravest prayer I've ever heard."
The opening line, which were repeated three more times throughout the poem,
are, "I tried to write a prayer for the world..."
A friend of mine read the poem, and shared it, by saying,
"Even if you're an atheist, like me, stick with it..."
Considering there wasn't one mention of God or Jesus in the poem,
not one allusion to God or Jesus, or even anything spiritual, to be honest,
it amazed me she would qualify her sharing with "even if you're an atheist".
I think many of us see the words “prayer” and “pray” and associate it only with religion – with church and with God.
But prayer can take many forms –
our breathing, our expressions of gratitude, our cries for help, a long walk in the woods with our ears filled with bird song –
and can focus various situations and needs and fears
without ever addressing a divine idea.
Author Madeleine L’Engle wrote the following as a conversation between two characters – a mother and daughter – in her novel, A Ring of Endless Light (the fourth book in the Austin family chronicles) but I offer it here as quote and as a way of making prayer more inclusive (especially for us ‘spiritual but not religious’ types):
“Prayer was never meant to be magic. It is an act of love.”