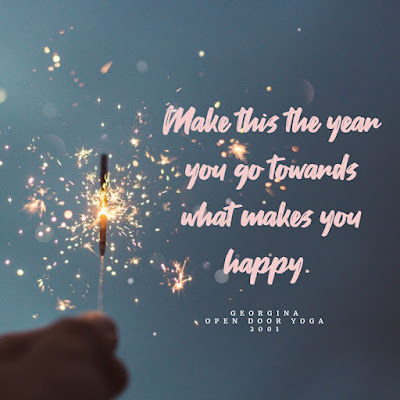 We are always receiving messages, whether you call them “signs” or “intuition” or
“gut feeling”, and whether or not we are aware of them, or even welcome them.
Messages telling us to get up and get going are presented to us every day, in some way.
Usually when you least expect them yet often when you need them the most.
On December 31, 2001, New Year’s Eve, I lay on a mat in a yoga studio in Vancouver, where I had been living for five years, and wondered what on earth I was going to do. My marriage was over but I didn’t seem to be able to move any further out of that life than down the hall to the guest room.
I was scared, I was hurt, I was confused.
Then our yoga instructor spoke these words: “Make this the year you go towards what makes you happy.”
It took a few more months until I was ready to leave, but during those months, those words from my yoga instructor would gleam through the darkness of a crippling fear of going out not knowing who I was or what I was going to do.
On the morning of my departure in early April, the day was dark and rainy, the North Shore mountains completely socked in by clouds. Shortly after driving out of the parking garage, I turned left onto the street that would take me out of the city to the TransCanada highway. A couple of blocks down the street, the clouds parted and the sun shone on my face for ten seconds. It was brief, and it was the only time that day I saw the sun, but it was enough.
That fleeing glimpse of the morning sun was the only sign I needed to confirm this was the right road and the right direction. I was going towards what would make me happy again. In the midst of my regrets and doubts and tears, I was able to recognize that.
The words of my yoga instructor struck a chord inside me and gave me the courage to move forward. The idea of going away from what made me unhappy was a powerful motivator for letting go of that marriage and heading out on the road of healing and understanding.
Because it’s the kind of letting go that lets your heart expand.
That lets the Spirit in.
That lets the messages -- the signs, the meant-to-be’s -- be heard, and seen, amid the cacophony of the advice, the what if’s, the worries.
When you let go of fear, that space fills with love.
And love is what makes us brave.
~ Sara Jewell